Will This Be the New iPhone 12 Launch?

How to Delete a Facebook Page Using Facebook’s Mobile Apps

How Americans Can Travel to Cuba Without a Group in 2019

The New York Times is More Than Just A Newspaper

Last night I ran across a news article about Melania Trump. It was in The NY Times and talked about how she’s speaking out on behalf of her husband to say that the women who’ve claimed that Trump has made advances towards them or groped them are lying. That’s not the man she knows and she doesn’t believe those claims. She said he was the victim of a broad conspiracy. I could only wonder how dense she must be or how desperate Trump must be feeling to resort to using such a pathetic tactic. Within that article was a link to the Access Hollywood video that started the fervor. I’d not seen it before so I watched both that and the rather lame apology video Trump made a few days later to the American public.

As sad as the state of our country’s politics are, they pale in comparison to events occurring in other areas of the world. Places like Swat, a beautiful village in Pakistan which the Taliban have invaded and taken over. Their members continue to reek havoc with the lives of residents living in this beautiful and quaint part of Pakistan. I watched a moving 1/2 hour documentary entitled Class Dismissed:  Malala’s Story about a young Pakistanian girl who desperately wants to return to school and her father who runs a local school. The father daughter team are almost single-handedly fighting a courageous fight against the Taliban to allow females to receive education.

Malala herself is desperate to continue with her education, recently changing her long term career goals from physician to politician. It’s a huge shift, but she recognizes that she can have a more beneficial impact in the later profession by aiding her country in joining the 20th century.

Another very brief video recounted the return of 21 young Nigerian girls to their families. They’d been  kidnapped by Boko Haram and the Swiss government was instrumental in gaining their release. But an estimated 255 girls are still being held and are hoped to be released soon.

The documentaries I watched were amazing!  Each story is beautifully produced, insightful and eye opening in some sense. They provides much needed windows into the lives beyond our borders which oftentimes depict struggles much more trying than those of our own current political crisis. Above is a link to the longer documentaries. These vary in length a lot and are they are always preceded by the same increasingly annoying (due to the repetitious nature) AT&T commercial. I only figured out after about the 6th video that you can actually tap to skip the repetitious ad after a predetermined amount of time!

The videos themselves often offer truly fascinating glimpses into lives far beyond our borders and show some of the struggles faced by average people just like you and me.  It’s well worth your time to take a look at some of these if you have a few minutes to spare.

Not All the Documentaries Take Place on Foreign Soil

Below: Kim Souzzis’s Reddit Campaign to raise funds for her own brain’s cryopreservation 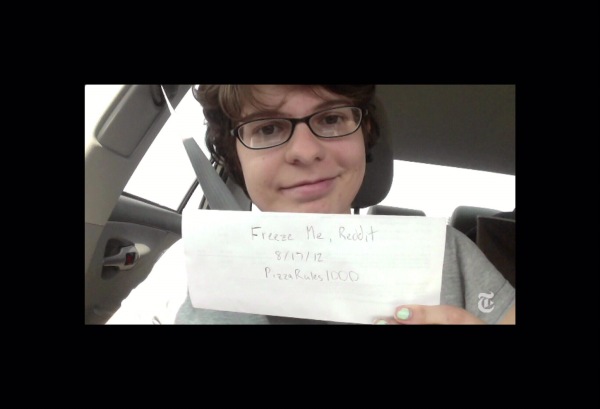 One documentary I really loved viewing tonight and which moved me beyond belief was the story of Kim Suozzis. She was a young college student who in 2012 discovered that she had a rare form of brain cancer. Her unique story began during her last year of college. Because she was studying to become a scientist in neurolinguistics and psychology, after she received her diagnosis, she engaged in a compelling journey to look for less obvious solutions which would help her in coming to terms with her undeniable future.

With the end of her life rapidly approaching, she discovered cryogenics. Her creative solution employed a spectacularly successful Reddit campaign in which she raised a large portion of the money she needed to preserve her brain cryogenically. This story follows the last 6 months of her life. We watch her peaceful death with her boyfriend at her side as well as the post death process of her brain’s cryopreservation. The process was lovingly overseen by her incredibly supportive boyfriend, who never ventured far from her side throughout her short, dramatic ordeal.

Since cryogenics was a topic my family had also recently engaged in lengthly discussions about, watching this young woman’s bravery and seeing how the process unfolded was simultaneously  fascinating and heart breaking.

Without doubt I’m sure there are other equally ‘edutaining’ examples of video collections produced by likeminded news sources. As I encounter those I’ll try to remember to add links to them here. Prior to my stumbling upon this New York Times collection I was oblivious to the existence of this content rich genre. My serendipitous enlightenment perfectly captures the essence of why I began my vsatrends website.

You can leave any comments or questions here. Cancel reply

This site uses Akismet to reduce spam. Learn how your comment data is processed.